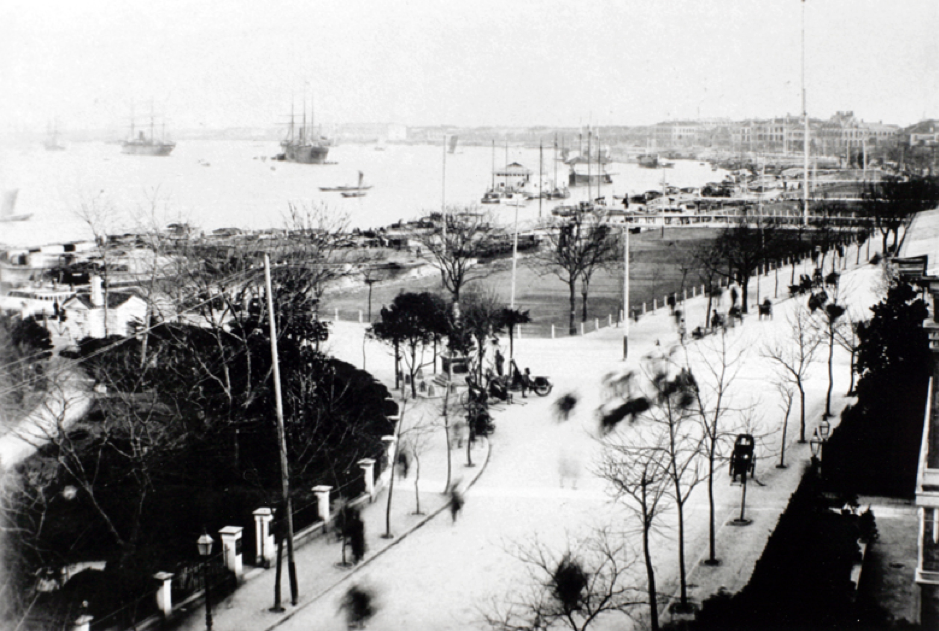 In this post, Dr Loughlin Sweeney provides an insight in the Irish world of Chinese port towns in the aftermath of the Opium Wars. We’re keen to hear about Irish diasporic communities which get less attention, so please do get in touch!

While a great deal of innovative work has chronicled the Scottish mercantile diaspora in the treaty ports of nineteenth-century China, there has thus far been little engagement with the communities of Irish people who inhabited these outposts of informal empire. The treaty port system, imposed upon the Chinese Empire by the British after the first Opium War in 1842, opened five Chinese coastal cities to international trade. It gave most favoured nation status to the British and established a British colony at Hong Kong. The trade in East India Company opium, and latterly in manufactured goods, played a dominant role in bankrolling the British Empire in the mid-late nineteenth century. Traders and professionals from all across the United Kingdom flocked to these outposts, where they contrived to emulate the lifestyles of the British upper classes under the protection of Royal Marines and the extraterritorial jurisdiction of a British legal system. The foreign compounds in these cities were a manifestation of empire in miniature, and thus carried an Irish imprint in a similar way to other outposts of the British empire.

Let us imagine the journey of an Irishman to China in the 1880s, by way of illustration of the ways Irishness was perceived and performed in the treaty ports. He might arrive into Shanghai, which by then had become the principal treaty port in China due to its position at the mouth of the Yangtze river. The fast, modern steamship which conveyed him there from the United Kingdom in a little over a month may have been mastered by Captain Goggin, a native of Limerick, and will have been met at Shanghai by the pilot, John Flood, who was born in Clonmel. Our imaginary Irishman might have become friendly on the crossing with the Dungarvan-born Mr. Evans, a general merchant, whose cargo must now pass through the jurisdiction of Shanghai’s customs commissioner, the Irishman Robert Bredon. As our visitor strolls down the Bund, the waterfront row of trading houses in Shanghai’s international settlement, he may brush past Thomas Jackson, the Co. Leitrim native and head of the Hongkong and Shanghai Banking Corporation, HSBC. At the end of the Bund, he will reach his hotel and meet its proprietor, a Mr Reilly from County Galway. Should our Irishman desire a new set of clothes, he may call on the services of Mr Driscoll, a tailor from Waterford. Should he wish to seek religious solace, he may find it with County Meath’s Sister Murtagh, and the other Irish sisters of Saint Vincent de Paul working in the city. To pass the time, he may read the latest edition of the Shanghai Mercury, and the activist pro-Catholic writing of its editor Henry O’Shea. He may peruse a selection of books released by the Shanghai publishers, Kelly and Walsh. He might transact business with Mr Miller, a merchant from Ulster, and have a contract drawn up by Mr Brereton, an Irish solicitor. His business concluded, he may call to visit the British Consul-General, the County Down native Patrick ‘Paddy’ Hughes, and his wife, a near relation of Sir Henry Bellingham, the Lord Lieutenant of Louth.

Our visitor is in luck; it is March 17th, and the members of the Shanghai St Patrick’s Society are hosting their annual dinner, at which he will renew his acquaintance with many of the Irishmen he has already encountered. The guest of honour is the Commander in Chief of the British forces in China, Major-General John Neptune Sargent, whose Anglo-Irish family can boast a long military tradition. He addresses the exclusively male gathering on the great opportunities open to able Irishmen in the service of the British empire; he notes that St Patrick himself was a traveller to faraway lands, and expresses the hope that, as St Patrick brought the Christian faith to Ireland, so the assembled Irish citizenry of Shanghai would bring the light of civilization and the boons of commerce to China. Finally, he elicits chuckles from the assembled diners as he encourages them to fill their heads with thoughts of home, rather than of ‘home rule’.

Following the dinner, our imaginary visitor, having rather over-indulged in wine and whiskey, might become easy prey for a pickpocket in the darkened streets. Waiting to take his statement are Inspectors Craddock and Hennessy, of Dublin and Mallow respectively, and the many former officers of the Royal Irish Constabulary among the International Settlement’s police force. If the miscreant is apprehended, he may come before an Irish Deputy-Judge, Mr Russell, who in turn reports to his superior, the Hon. Edward Loughlin O’Malley, the Attorney-General of Hong Kong. Meanwhile, our visitor might console himself with a hangover preparation provided by the Corkonian Dr Hettrington, or the Dublin-born Dr Jameson. His business in Shanghai concluded, our visitor may then put himself in the capable hands of the Dungarvan native Captain Howlet, to take him back to Europe.

The narrative is fictitious, although it loosely follows the journey taken by a contributor to the Freeman’s Journal in 1885. All the aforementioned Irish people were real residents of Shanghai, and are indicative of several characteristics of the Irish population in nineteenth century China. It was a community dominated by the professions, and whose recreational and commercial activities were carried out in an environment which was exclusively male. Irishwomen were, for the most part, excluded from the spaces where performances of Irishness occurred, in clubrooms, boardrooms, and newspaper columns.

As in other colonial localities, the Irish medical and military diasporas are well represented, and notably there was also a strong representation among Irish police officers, something which became a feature of other colonial Irish communities after the disbandment of the Royal Irish Constabulary in 1921. Professionals in government roles, in the judicial system and the Chinese Maritime Customs in particular, played a prominent role, and the apparent over-representation of Irishmen in these positions was periodically remarked upon in the colonial press. Finally, the treaty ports’ stated function, of ‘opening’ the Chinese interior, provided opportunities for Irish missionaries that could not easily be accommodated in the formal British empire.

In sum, while the treaty ports evince an imperialized Irishness which was reproduced in other colonies, the informal and international nature of the treaty ports perhaps provided a slightly wider scope for expressing an Irish identity. To ascertain the implications of this for studies of the imperial Irish requires more research.

Dr Loughlin Sweeney is an Assistant Professor at the John Endicott College of International Studies in South Korea. He is the author of Irish Military Elites, Nation and Empire 1870-1925, which is forthcoming with Palgrave Macmillan this September. He is in the early stages of a project on Irish connections and migration in the Chinese treaty ports. Loughlin can be contacted through email lsweeney@endicott.ac.kr.